Dr. Priya Rudolph Reminds You to Notify Your Doctor if You Have Trouble Swallowing 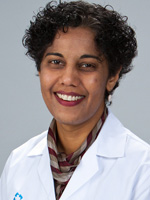 It all started with difficulty in swallowing solid foods and occasionally liquids. Bill knew something was not right and immediately sought attention. He was evaluated with an endoscopy. This is a test where the doctor inserts a tube with camera at the end of it (endoscope) down in to the esophagus and stomach and is able to look for ulcers, cancers or other abnormalities. Bill had a tumor at the end of the esophagus and biopsy confirmed esophageal cancer. We then treated him with chemotherapy and radiation treatments to shrink the cancer, following which he underwent surgery to remove the cancer. Today Bill is cancer free.

Esophageal cancer often presents as swallowing difficulties and can also present with heartburn and pain behind the breastbone. It can block the passage of food down the esophagus, causing nausea or vomiting when attempting to eat. If left alone it can spread to other places in the body and cause other symptoms due to cancer spread such as weight loss or pain.

As in Bill’s case, endoscopy can identify the cancer and allows taking a biopsy to confirm diagnosis. Other tests such as PET/CT scan are often used to see if cancer may have spread to other parts of the body. If cancer is limited to the esophagus, it can be cured by initially shrinking it with combination of chemotherapy and radiation treatments given together. Due to advances in management of side effects, today all treatments are mostly given as outpatient and some patients are able to carry on with their routine life while receiving treatments. Following this, the cancer is surgically removed and within few weeks after surgery patients are able to swallow normally again.

April is Esophagus cancer awareness month. According to the American Cancer Society approximately 16,000 Americans are diagnosed with Esophagus cancer each year. For unclear reasons it is three times more common in men than in women. Smoking and excess alcohol consumption are two common causes of esophageal cancer. Also being overweight and history of acid reflux can increase risk of esophageal cancer.

Last year, the FDA approved a new medication (targeted therapy) called Ramucirumab (Cyramza) in treatment of advanced esophagus and stomach cancer. This works by blocking growth of new blood vessels that help cancer cells grow and spread. This is the first targeted therapy approved in treatment of esophagus and stomach cancer. The advantage of targeted therapies are that they directly attack cancer cells while doing less damage to normal cells and thereby cause less severe side effects than standard chemotherapy drugs.

Like many other cancers, esophageal cancer can be cured if detected early. Don’t ignore symptoms of swallowing difficulties or acid reflux, and notify your health care provider if are experiencing any such symptoms. A healthy life style without smoking or excess alcohol consumption and maintaining a healthy body weight by regular exercise will help prevent esophagus and many other cancers in the body.

Dr. Priya Rudolph, a graduate from Yale University is an experienced hematologist/oncologist with Georgia Cancer Specialists. She has offices in Athens (ph 706-369-4478) and at the Cowles Clinic in Greensboro (Ph 706 454-0159). Georgia Cancer Specialists is a top 10 privately owned practice and is a national leader in advanced cancer treatment and research. Its physicians and staff offer many clinical trials and state of the art personalized care to each individual patient.