Georgia Cancer Specialists (GCS) COO Dr. Wendy Lenz and employees Bonnie Dixon, Ramona Foye, Tessie Jones, and Michelle Yeomans are part of a group spreading the word about GCS’s trek to the moon. Foye, Jones, and Yeomans were featured on Fox 5 Thursday, July 9 in a news story about GCS’s Walk to the Moon health initiative. Dr. Lenz, Dixon, and Foye were featured in an Atlanta Journal-Constitution piece about Walk to the Moon that included a front-page teaser and a full article on the front page of the Metro section Monday, July 20 – the anniversary of Apollo 11’s historic moon landing 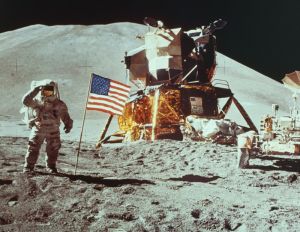 Walk to the Moon is a challenge to all GCS employees to collectively walk the 238,855 miles from the earth to the moon in 8 months, in honor of the 40th anniversary of Neil Armstrong’s monumental moon landing. In order to successfully complete the challenge, the roughly 400 GCS employees would have to walk a total of 477,710,000 steps.

Foye, Jones, and Yeomans incorporated creative ways to walk more into their daily routines as part of the challenge, and they became more active because of the initiative.

“Instead of calling a coworker to ask a question, I’d just walk down to wherever their office was and ask in person,” said Yeomans. “By doing things like that I’ve been able to log an average of 10,000 steps each day.”

“I never would have believed that I could walk 600 miles in 5 months,” said Jones, who lost 32 pounds because of the challenge. “A million steps. That’s a lot of steps!”

Ramona Foye accepted the challenge in an effort get healthy for herself and her family despite being a very busy mother of five. “I made the time to walk,” said Foye. The effort has paid off. Since beginning the challenge, she has lost 21 pounds.

Although GCS won’t reach the 238,855 mile goal by the July 20 moon-landing anniversary, they are on target to reach the moon sometime around early October. Despite being slightly behind the target date, the initiative has been a huge success because many GCS employees have been inspired by Walk to the Moon to integrate the good habits of exercise and healthier eating into their lifestyles.

Georgia Cancer Specialists is the largest private medical oncology/hematology practice in the Southeast and a leader in advanced cancer treatment and research. The practice offers community-based medical oncology and hematology services and is the first private oncology practice to also provide a full range of support services for patients in Georgia, including nutritional counseling, pain management, wellness counseling, and home health coordination. The GCS research department, whose focus is bringing targeted cancer therapy to communities, is the first in Georgia to offer Phase I clinical trials, the most novel cancer therapies available. GCS has 30 offices, 42 physicians, and more than 480 support staff members located in Metro Atlanta, North and Central Georgia, Southeast Tennessee, and Southwest North Carolina, and provides care through approximately 205,000 annual patient visits. Georgia Cancer Specialists can be found on the web at www.gacancer.com. GCS is The Cancer Answer.